The Uplifting Ministry of the Upper Room

This morning it felt like God was taking me into the Upper Room with Jesus. I have read the history of this last Passover many times. I have preached through the teachings of our Savior on that night. I even washed some people’s feet on one occasion because it seemed to be the way I was being led to express my love to them. And I have often put into practice the meaning of the foot-washing lesson by serving the body of Christ in love.

But this time is different.

As usual, this coincides with things I am going through. There are personal things that are just a fact of life. There is our town that went through a disastrous flood-event a month ago that had us evacuated for almost three weeks and many in our community suffering the loss of home and/or possessions. And there is the simple fact that the word of God is living and active, and the Holy Spirit is constantly teaching us the multi-faceted applications of God’s word to every day and experience of our lives.

This present journey through the Upper Room scene leading to Jesus’ crucifixion has me looking at Jesus through the eyes of his disciples. I wonder what his face looked like as he loved his disciples to the end even while about to become sin and a curse for us. When his face become troubled as he told the disciples that Judas would betray him, was it a look they had never seen before, or something familiar that made them immediately feel troubled along with him?

On one side, it feels horrible to put myself in the disciples’ place. I can tremble with the awareness of being called a betrayer and wonder what it would have felt like to repent right then and there. I barely need to imagine what it would be like to be a denier and know that the Savior had just told everybody what I am really like on the inside. Being a deserter requires no imagination at all, but it does take a huge effort to look into Jesus’ eyes and consider everything he says that night as exactly what a deserter needs to hear.

On the other side, there is a way to get to know Jesus in his love for me when he tells me that I am a denier and then I see his eyes searching me in love, and I listen to the words that come from his mouth, and I feel his love inviting me to the center stage feature of the cross where his love for me was demonstrated perfectly and completely forever. There is a way to know Jesus in his love for me when I have no doubt that I am a deserter, and that he has exposed me as publicly as he desires, and then I listen to what he is saying in wonder that this is what he would choose to communicate after telling me what a failure of a friend and disciple I am going to be.

As I prayer-journaled through the Scriptures this morning, the one thing I could state as a certainty was that the promises of the gospel are all mine. I couldn’t seem to say anything about myself for certain, whether good or bad, but the certainty of God’s grace in the gospel is an indisputable reality in my heart.

This means that, no matter how I feel about myself as a sinner and a failure, it is by calling on the name of the Lord Jesus Christ that I am saved. It is by a faith that God himself has given me that I attach to the grace he expresses to me in that superabounding way that is greater than all my sin, and failure, and…

Well, let’s just say that I quite easily exhaust the thesaurus with nouns that describe my accomplishments in sin and failure and am almost moved to silence with the wonder of the nouns and superlatives that describe the glories of Jesus’ love and grace and mercy towards me.

This morning, I found myself feeling very real with God about what he was telling me about myself. I was almost trembling with wonder that he enabled me to look at him through the eyes of each of the disciples and how they received what he was doing and saying. Things that would normally trigger me into hiding now have me trusting that if I will just fix my eyes on him, and consider him the way Scripture describes, that I will see the love of the cross for a sinner. And feel it comforting me where I mourn.

As soon as I finished writing this as my sharing to our home church, a favorite old song popped into my head. It was the hymn, “O Love That Will Not Let Me Go”.[1] I looked on Youtube to see if there was something I could sing along to as part of my worship and this version grabbed my attention. I ended up crying in thankfulness all the way through it as it concluded everything God was ministering to my heart this morning. I hope it has the same effect of wonder-filled worship on you.

[1] O Love That Will Not Let Me Go, © Public Domain, words by George Matheson

Jesus Glorified in the Worst of Betrayal

This past Sunday, our home church looked at the way Jesus in the Upper Room drew attention to Judas as his betrayer.[1] We considered the exposure of Judas in his act of betrayal, but also the way Jesus as head of his church is free to expose anything going on among his disciples any ways he sees fit.

We see this in the way the apostles tackled issues in their letters to the churches, mentioning situations that needed addressing, and sometimes even giving names of the people involved. They show how Jesus continued to expose things both in the churches addressed, and in how God’s word speaks to local churches today.

In the Upper Room fellowship we are working through, we saw that as soon as Judas acknowledged his intent to betray Jesus, and he was exposed in front of the other disciples even though they had no clue what was going on, the next thing we read is this:

“When he had gone out,” simply encouraged me that Jesus was in charge, not Judas, and not even Satan who had just entered Judas. It shows me how Jesus related to the group while Judas was there, and what he does once Judas is gone. Judas was included in the foot-washing that preceded everything because Jesus was showing his love to his whole band of disciples, and this love was expressed even to one who was actually an enemy in his heart. But the rest of the evening was only for those who were his true disciples after all.

“Now is the Son of Man glorified, and God is glorified in him,” blows me away with wonder that a scene that presents the worst betrayal ever is immediately followed by Jesus declaring his glorification. What Judas intended for harm, and what Satan intended for harm through Judas, Jesus knew that in the next three days he would be glorified as the Lamb of God who takes away the sin of the world.

“If God is glorified in him, God will also glorify him in himself, and glorify him at once,” tells me that Jesus has an undying desire for his Father to be glorified in his life. Our home church had been looking at this in Jesus’ High Priestly prayer for a while,[3] and now as we look at what led to that prayer, we can’t escape that the theme of the Father’s glory is in Jesus’ heart and ought to be in ours as well.

However, the “glorify him at once,” is talking about the Father glorifying Jesus, which is also to the Father’s glory. And the “at once,” tells me that Jesus was in charge. He had just commanded Judas and Satan to do the betrayal quickly.[4] Up to this point, no one could touch Jesus because it wasn’t time. Now that God has decided it is time, Jesus will be glorified at once. The betrayal will not stop this, but it will work for the exact good of Jesus being glorified.

What this gives me for my prayer time is that Jesus is showing his disciples our hearts today just as he did then. There is not one negative thing we see about ourselves, or one negative emotion we feel about anything we are going through, that is outside Jesus’ authority to work it for good.

I am taking everything that is happening around me, being honest about all the things life is doing to me personally, and all the things I see going on in his people, and going to God like a little pestering child who will keep asking until I receive, keep seeking until I find, and keep knocking until the door is opened.[5] I would rather be exposed and have to grow up than hide in a world of self-protection where everything tries to stay the same.

Our home church considers prayer meeting night a very significant aspect of body-of-Christ living. As I see how Jesus continues to relate to his church the way we see him in the Upper Room, I am confident I will know how to join God in his work as we gather for prayer, and to unite with each of the other members of Jesus’ body as we seek the unity of the Spirit in the bond of peace.[6]

However, while we may only see one puzzle piece at a time for each of us, the picture God is weaving before our eyes is one of Jesus being glorified, and I want to be part of that with all my heart.

When our town of Merritt got flooded out on November 15, 2021, the whole community was put on evacuation order because the sewer and water systems were severely damaged. This gave my family a few weeks away waiting for the word that we could return. During that time, I designed a template for sharing something each day on Facebook and have continued using it since we have been home. Here is how I shared about today’s lessons in a shorter form. 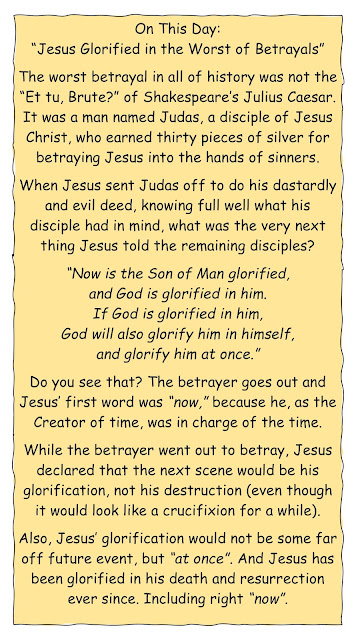 One of the things about Jesus that has surprised me the most is that he is able “to sympathize with our weaknesses”. One way we learn how he does this is by looking at the things he endured and accepting that this means he sympathizes with us when we endure the same things.

Many of us know what it feels like to be betrayed by someone close to us. However, many of God’s children don’t know how to attach to Jesus with their feelings of betrayal because there are so many negative emotions surrounding these experiences. Often, we imagine that God is not interested in such things.

What we see in Jesus’ own experience of betrayal is not only the way God worked this together for good so that Jesus was glorified as the Savior of the world, but that Jesus now sympathizes with us in our experiences of betrayal and wants us to bring them all to him for healing. This post is an invitation to do just that.