The Stage of What is Wrong With Us

On the morning I wrote this, some obnoxious people woke me up early as they were walking up and down our avenue pushing a shopping cart and talking and laughing in that loud way that suggests they were under the influence (shopping cart wheels are very LOUD in the middle of the night!). My sark suggested some things I could do to them, and the Spirit told me to pray for their salvation. I’m glad I have matured enough to not waste time fighting over such things.

The next thing I come to in my Bible study through John is a whole chapter dedicated to Jesus healing a blind man, along with all the relational dynamics that came into play. What starts with Jesus healing a blind man ends with the man believing in Jesus (the “seeing” Jesus was aiming for) and Jesus showing the religious hypocrites they were blind no matter how arrogant they were that they could see.

However, what stood out was a statement Jesus made that was parallel to one we looked at in home church on Sunday. Today the threads of the tapestry seemed all the brighter, perhaps for the way they were woven together. Here they are side-by-side: 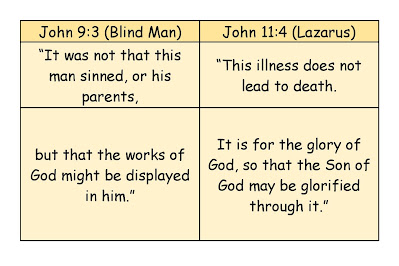 Parallel 1: It is not what is wrong with us that is the issue. The first man’s blindness, or Lazarus’s illness killing him, are not the focus. It doesn’t even matter what we have done or what our parents have done. It doesn’t even matter if it is the worst-case scenario ever (someone dying). This is the common denominator, that what is wrong with us isn’t the issue. It’s just the stage.

Parallel 2: Everything is about how God would display his works in our lives for his glory and our good, or for his praise and our joy. It doesn’t matter if blindness gives God the opportunity to grant us sight, or death gives him the opportunity to reveal himself as the Resurrection and the Life. Everything is about God glorifying the Son in what is wrong with us so the Son may glorify the Father in our lives no matter what we are going through.

John concludes his gospel with, “Now Jesus did many other signs in the presence of the disciples, which are not written in this book; but these are written so that you may believe that Jesus is the Christ, the Son of God, and that by believing you may have life in his name.”[1]

The purpose of the signs was to lead people to believe in Jesus so they could have the life he came to give. The result of Jesus healing the blind man was that he came to believe that Jesus was “the Son of Man,” the Savior of the world. It also exposed that the Pharisees were blind, calling them to the poor-in-spiritness that would open their hearts to the blessing of God.

Processing all these things led me to feel a very distinct urging of the Spirit to crucify any focus on my sins or what is wrong with my parents (as he directed attention away from these things with the blind man). At the same time, my attention must be on things that are wrong with me in order to surrender to God’s activity of displaying his work in my life so that the Father is glorifying the Son in order that the Son can glorify the Father.

I was quite thankful to have that opportunity to be up early seeking God about something that was so deliberately prepared to bless me. I do believe that God will continue tweaking this in me so I can turn my attention from how I  or others have sinned, to letting God use things that are wrong with me to put his glory on display.

My response is to follow Paul’s counsel myself, and together with you, “Therefore, my beloved, as you have always obeyed, so now, not only as in my presence but much more in my absence, work out your own salvation with fear and trembling, for it is God who works in you, both to will and to work for his good pleasure.”[2]

God has a work he wants to do in my weakness. With fear and trembling I will let him use my weakness to set the stage on which he can do his work. Yikes, sigh, Praise the Lord!!!

Posted by Monte Vigh at 7:24 AM No comments:

The Certainty of Life

No matter what we think of anything going on around us, the human mortality rate is still at 100%. As God says in his Book, “it is appointed for man to die once, and after that comes judgment”.[1]

As I have grown in relationships over the years, one thing I have learned is that genuine attachment to people never grows old. I understand that loss of relationships can leave an elderly person so lonely they want to just be done with life. I understand that so many painful experiences with rejection can cause someone to lose the will to live. I can even appreciate that we may deteriorate so much in a physical way that we are unable to maintain any personal attachment to people at all and so the desire to be alive fades away.

With death threatening us from every direction, these words of the Creator stood out to me in wonderful comfort this morning: “Truly, truly, I say to you, if anyone keeps my word, he will never see death.”[2]

This is a scenario where Jesus was talking with people who thought they believed in him while he knew they did not.[3] Jesus couldn’t leave them like that because then they would die in their sins while thinking they were good with God. Jesus had to direct them to the only way they could truly know that they had eternal life.

What stands out is the promise that people “will never see death” if they keep Jesus’ word. Keeping Jesus’ word is not switching from Old Testament Law to New Testament Law. It cannot be performed by outward behavior alone. Jesus’ word is about loving one another as the Triune God loves us, so only when the love in the vine flows into and through the love of the branches is someone truly a disciple of Jesus Christ.[4]

Earlier in his ministry, Jesus introduced this same theme by saying, “Truly, truly, I say to you, whoever hears my word and believes him who sent me has eternal life. He does not come into judgment, but has passed from death to life.”[5]

Hearing Jesus’ word and believing what the Father says about his Son is what opens the door to eternal life. As a result of experiencing this kind of faith, we are no longer under the condemnation of judgment, but have already passed from death to life. Jesus meant that this is true even for all the millions of believers who have died while waiting for his return.

Jesus put this straight into the context of death when a man named Lazarus had passed away. Jesus told his disciples, “This illness does not lead to death. It is for the glory of God, so that the Son of God may be glorified through it.”[6] It is so clear that this does not mean Lazarus wouldn’t die, but that it would not end in death.

When Jesus went to the town where Lazarus had died, he told the sisters, “I am the resurrection and the life. Whoever believes in me, though he die, yet shall he live, and everyone who lives and believes in me shall never die. Do you believe this?”[7] Jesus was telling them that, when someone believes in him, they will either live even if they die, or live without ever dying. Both are possible; it simply depends on where anyone fits into the unfolding events of history.

The apostle Paul explained this quite clearly when he wrote that, because Jesus died and rose again,

we who are alive, who are left until the coming of the Lord, will not precede those who have fallen asleep. For the Lord himself will descend from heaven with a cry of command, with the voice of an archangel, and with the sound of the trumpet of God. And the dead in Christ will rise first. Then we who are alive, who are left, will be caught up together with them in the clouds to meet the Lord in the air, and so we will always be with the Lord. Therefore encourage one another with these words.[8]

In our day, when it is so evident that, “The thief comes only to steal and kill and destroy,” it is absolutely necessary to know the Savior who, “came that they may have life and have it abundantly.”[11]

The way things are going in the world, it is entirely possible that the evil things perpetrated by one government after another could lead to my premature death. In that case, as Paul testified, “For to me to live is Christ, and to die is gain.”[12]

At the same time, the way things are going in the world, Jesus could appear at any time. Some of us may be the ones who never see death but are gathered together with those who are raised from the dead. The key is that, “we will always be with the Lord.” And that is what really matters.

I started with the dire warning that, “And just as it is appointed for man to die once, and after that comes judgment”. However, what God says next is what gives hope to all who trust in Jesus Christ. God’s word continues, “so Christ, having been offered once to bear the sins of many, will appear a second time, not to deal with sin but to save those who are eagerly waiting for him.”[13]

Jesus will “deal with sin” with all those who have rejected him. But, for those who have received him, we can wait eagerly for his return. Either we will die before Jesus comes and immediately go be with him while waiting for our resurrected bodies, or we will be alive when he returns and go to be with him without passing through death.

Either way, there is coming a grand event of receiving glorified bodies in which we will forever be with our Savior in the presence of his Father and the joy of their Holy Spirit. Trusting in Jesus Christ now is all it takes to receive this incredible gift of grace forever.